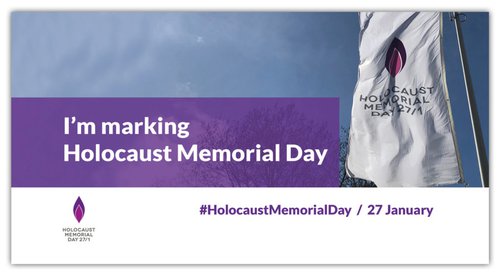 Bishop Cherry is encouraging us to pause, remember and pray as we mark Holocaust Memorial Day.

In her weekly reflection, she says:

When the UK was going into lockdown for the very first time back in March last year, I vividly remember Prof Chris Whitty, England’s Chief Medical Officer, saying that if we got away with just 20,000 deaths we’d be doing very well. Anything like 20,000 nearly a year ago seemed an astonishing figure to be quoting. We could scarcely believe that the situation we were in could be that bad. But, of course, as the days went by and the number of deaths crept up, the 20,000 came and went and we’re now nearing 100,000; over 4,500 of them here in Wales. The figure across the world is over 2 million: a mind numbing number to be contemplating. But personally, I find the starkest figure to get my head around is the number who are dying in the UK every single day which, at the moment, is standing at 592.

Each one of those 592 is a person: someone’s parent or child, someone’s brother or sister, and in many cases, someone’s life partner. Hearing a name, seeing a photograph, knowing where they lived and what their line of work was, helps us translate those rather detached statistics into the human cost. And that, of course, makes the statistics even more heart-rending.

Today, January 27th, is Holocaust Memorial Day. Now an international day of remembrance, it marks the anniversary of the liberation of Auschwitz when the world was forced to confront the horror and scale of genocide taking place on European soil and the German people were forced to confront what had been going on under their very noses. 6 million Jews were killed in death camps such as Auschwitz and millions of others were murdered as well, including gypsies/travellers and lesbian and gay people. The numbers are horrifying enough, but the real horror lies in the fact that there was a plan, a strategy to rid the world of Jewish people. The Holocaust was a systematic attempt to wipe out a whole race. A staggering two thirds of Europe’s Jewish population were murdered.

As with the pandemic, though for very different reasons, the numbers are mind-boggling. How do we begin to imagine what 6 million people looks like or begin to conceive the sheer scale of the human cost?

Yad Vashem, the World Holocaust Remembrance Centre in Jerusalem, is dedicated to preserving the memory of the Jews who were murdered. With no traces left to mark their lives and deaths, the Hall of Names at Yad Vashem holds what biographical details have been recovered. So far, around 4 and a half million of them are recorded both there and on a database and the search goes on for the others. There are a number of Twitter accounts such as Auschwitz Memorial that I, like a million others, follow which, each and every day, marks the lives of at least some of those who died and whose birthday falls on that day. Today, for example, there’s a photograph of a French Jewish girl born on this day in 1932. She arrived in Auschwitz on 21st August 1942, so aged just 10, and murdered in a gas chamber after selection.

This makes for deeply uncomfortable reading, but it brings the statistics alive and so is vital to our remembering - not just them as individuals but our remembering the scale and the horror of what happened within living memory: how frighteningly easy it is for human beings like you and I to kill, and kill on a vast scale and believe that we’re doing the world a favour.

Had we not been in the midst of a pandemic, there’d be hundreds if not thousands of Holocaust Memorial Day ceremonies taking place up and down the UK tomorrow giving communities and schools the opportunity to remember and to reflect on what evil human beings are capable of given the right circumstances. Whilst ceremonies in person can’t happen this year, we can still pause for a moment tomorrow and remember the horrors of the Holocaust and pray for the courage to stand up against attitudes that still prevail and which can so easily lead us into victimizing others who are different, who make us feel uncomfortable or threatened, who don’t fit in with our kind of norms. Let’s pray too for the Jewish people who suffered so indescribably at the hands of the Nazis and are still victimised today, even in the UK.